Today in a Phoenix, Arizona courtroom, Tracy Elise, the self-dubbed “Mystic Mother” and founder of the Phoenix Goddess Temple was found guilty on 22 separate counts including Conducting an Illegal Enterprise, Money Laundering, and Prostitution. She will be sent to prison for a significant amount of time when she is sentenced on April 8, 2016.

Phoenix Police conducted an extended investigation which showed that the Temple, which professed itself to be a church, was actually a front for prostitution whereby parishioners would tithe the church in exchange for sex acts according to a set donation schedule established by Reverend Elise. The Mystic Mother also attempted to get non-profit status for the Temple, a move that could bring federal tax fraud charges against her, assuming that any prosecutor really cares years down the road after she completes her prison sentence. 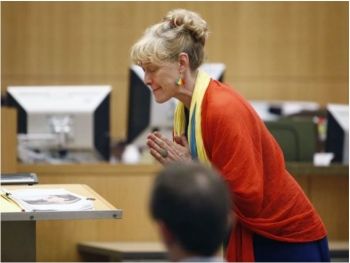 A Defendant Who Self-Represents Has a Fool for a Client

Lawyers spend many years going through school and even more receiving on the job experience. Criminal defense lawyers who handle serious charges like money laundering and other white collar crimes spend even longer learning this very specialized area of the law. Elise, however, had no such training and made the foolish mistake to take on prosecutors without having experienced counsel to guide her.

Elise claimed to a jury that the church’s actions were protected as acts of religious freedom and that the consensual sex was part of the religious rituals. She drank so much of her own Kool Aid, that she thought that a jury would drink some too and buy into her beliefs. While previously in the case, she did have a criminal defense attorney representing her, the reality of the matter is that she didn’t want to listen, decided to represent herself, and ended up with a fool for a client.

Also, no matter how good you think your defense is, it's a really bad idea to finish your closing argument by bowing in front of the jury and announcing "Namaste." (See photo above).

Don't Take the Law Into Your Own Hands

If you had a serious medical condition, you wouldn't do surgery on yourself. You would leave it to a doctor who had the training and experience to guide you through the situation. It's no different when you are charged with a serious felony offense. You don't want to take the law into your own hands and need to hire an experienced criminal defense attorney. Jason Lamm is one of Arizona's best and has represented clients in state and federal courtrooms for the last 25 years.