A former federal agent in Nogales was sentenced to five years of probation after he pleaded guilty to selling firearms without a license.

Joseph Gill, a 42-year-old former supervisory special agent with the Drug Enforcement Administration, sold a Colt model M4LE 5.56-caliber semi-automatic rifle in July 2016 to a suspected drug trafficker, which came to light during a federal investigation of the drug-trafficking organization.

The rifle was smuggled into Mexico and a nearly identical rifle sold by Gill was seized on a shuttle heading into Mexico through Nogales, U.S. District Court records show.

Gill pleaded guilty in August to a felony charge of selling firearms without a license, with reason to believe the buyers of the rifles would use them unlawfully, court records show. He faced up to two years in prison under his plea agreement.

At a sentencing hearing Monday, Gill said he had sold firearms for many years, calling it a “hobby that I took to an extreme.” He said he did not know the buyers of the rifles were part of a drug-trafficking organization, but “I should have known better and I should have done better.”

Gill was represented by Jason Lamm, a Phoenix based criminal defense attorney who is well known defending in clients charged with complex criminal offenses in Arizona federal courts, argued for probation stating that, among other things, that Gill had an exemplary record as a DEA agent and was truthful with investigators at all times.

District Court Judge Raner C. Collins said he was “torn” about how to sentence Gill, but decided to “give him the benefit of the doubt” as he was persuaded by Lamm’s arguments.

The first six months of Gill’s five years of probation will be served on home detention, Collins said. He ordered Gill to pay a $15,000 fine and perform 500 hours of community service. Gill is prohibited from possessing a firearm.

Gill resigned from the DEA on June 30 after 14 years with the agency. 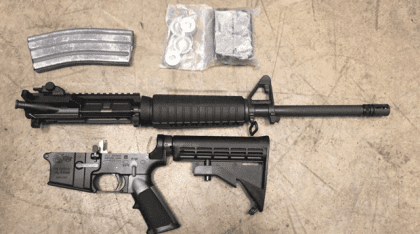